Remote Buddy 1.25 adds support for Harmony Smart Control, providing control over 100+ Mac apps - and what else is new

For more than eight years now, Remote Buddy users have received free updates. And today's release - which brings many new features and improvements - is no different. 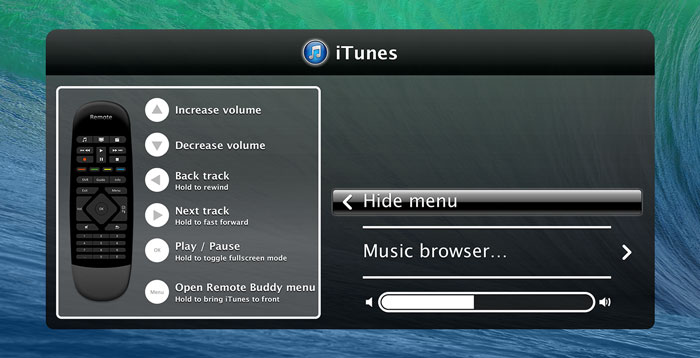 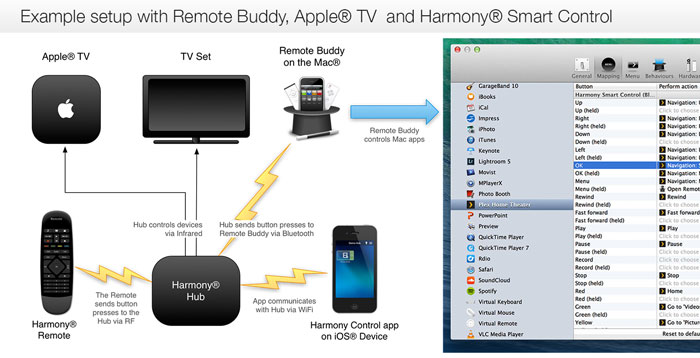 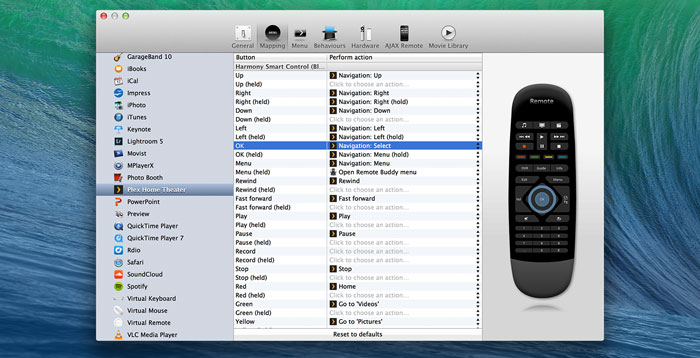 The Harmony Smart Control can now be paired with Remote Buddy on the Mac. Once the Bluetooth pairing has been established, Remote Buddy is available as a device to the Harmony.

More than 100 Mac apps supported by Remote Buddy (including Plex, EyeTV, iTunes, Rdio, Spotify, DVD Player, Mac Blu-Ray Player, iPhoto, Lightroom, XBMC, Movist and VLC) can then be controlled with the same remote that can already control other devices like TV sets, beamers, game consoles, the Apple TV and even Philips Hue lights.

Together, Remote Buddy and the Harmony Smart Control form an elegant, powerful solution for the deep integration of a Mac into a home entertainment setup.

The duo also gets the basics right: thanks to the use of Bluetooth, the connection between the Mac and the Harmony Smart Control is rock solid, button presses are received almost instantly and no line of sight is needed. Since almost all Macs have a Bluetooth adapter these days, no USB adapters are needed in most cases, either. The lightweight RF remote included in the Smart Control package feels good in the hand and, according to Logitech, the exchangeable coin cell battery lasts at least a year.

Want to get started? This How-To lists all needed parts and system requirements. It also shows how to set them up. Additional info is also available in a dedicated FAQ section and on the hardware page.

Launches up to three times faster

Remote Buddy has to do a lot of heavy lifting during launch. Over 100 plugins are scanned, evaluated and loaded. A multi-threaded driver environment is spun up. Drivers are loaded into it, hardware is initialized and prepared for use. User preferences and graphical assets get loaded. And finally, all the seperate parts are brought together.

In this release, new caching and indexing techniques help to greatly reduce the number of files that need to be loaded from disk, reducing load on the I/O system and resulting in an up to three times faster launch.

Sort and Album Artists in iTunes

The iTunes Behaviour now sorts artists by what iTunes calls "Sort Artist", so that you now find "The Beatles" in the neighbourhood of "Bauhaus", not next to "Trentemøller".

The iTunes Behaviour also adds a new "Album Artists" category in its "Music Library" menu. When tracks on a single album are by "X" as well as "X feat. Y" and "X feat. Z", you see three different entries in "Artists", each of which only refers to parts of one and the same album. In contrast, if you use "Album Artists", you'll only see an entry for "X" - and all tracks of the album will be shown.

Apple no longer allows submissions to the Mac App Store that make use of QuickTime or QTKit. Instead, developers should use AV Foundation, a framework that made its debut in OS X 10.7.

For Remote Buddy Express, this means that the minimum required OS X version is now 10.7 (10.6.6 previously). The alternative would have been to drop the "Camera" feature from AJAX Remote. At the time of writing, Remote Buddy Express 1.25 is "waiting for review".

Remote Buddy can still use QuickTime and QTKit (and in fact does if you run it on OS X versions before 10.7), but requires at least OS X 10.6 now. Almost all Intel Macs can be upgraded to at least this version.

A few users reported that they could no longer control PowerPoint 2011 with Remote Buddy after upgrading to OS X 10.9. Fixed with this release.

The Behaviour Construction Kit now automatically generates a truly unique identifier for every new Behaviour you create, eliminating a frequent source of errors and confusion when more than one Behaviour was created and all created Behaviours shared the same identifier.

This release is again compatible with the latest version of Aurora. It also addresses timing issues when using some EyeTV receivers as IR receivers for Remote Buddy.

We haven't been this excited about a new OS X release for some time. And of course one of the first things we do with Developer Previews is to test our software on them.

In early (but incomplete) tests Remote Buddy works well. Except for one thing: starting with Yosemite, OS X will only load kernel extensions that have been signed with an extended version of Apple's Developer ID. Since Remote Buddy's driver is signed with only a standard Developer ID, it won't get loaded - and Remote Buddy can't access most of the hardware supported through it.

We've already applied for the extended version of Apple's Developer ID and hope to soon provide a version of Remote Buddy's driver that will be accepted by Yosemite.

Until then, you can work around this by turning on Yosemite's kext developer mode. You do this by entering this line into Terminal.app:

A reboot later your installation of Yosemite will again load Remote Buddy's driver.

IMPORTANT: Please keep in mind that OS X Yosemite right now is only available as a Developer Preview. It's not the final thing and bugs and unexpected behaviour have to be expected. So whatever you do with Yosemite at this point: be sure you have backups of all data you care about at all times.

Since we are still months away from Yosemite becoming available to everyone, Remote Buddy does not yet officially support Yosemite. Yet we'd still like to hear from you if you run into any issues.

The Mac market has seen massive growth in recent years, making it a lot harder for indie developers to get the word out on their apps. This is true even for niche software like Remote Buddy. If you like Remote Buddy and want to support us beyond purchasing a copy, please consider telling your friends about it. It really helps. Thanks!