The new big cat is now in the wild - and so is Remote Buddy 1.18, giving you access to some of Lion's greatest new features via your remote on the day of Lion's release. So, what's new? What has changed?

PhotoBooth has always been fun to play with. Lion adds new effects and a gorgeous fullscreen mode. With Remote Buddy, you can now switch in and out of this new mode - and even select the effect of your choice via your remote. For the latter, Remote Buddy implements its own selection interface that it displays on top of PhotoBooth (pictured below). 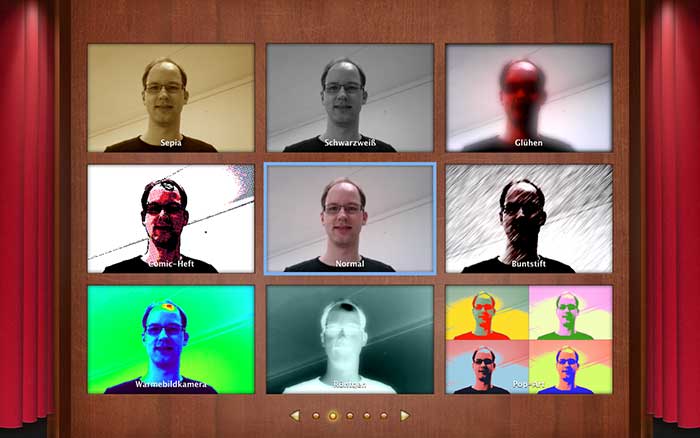 Use Remote Buddy instead of Front Row

Starting with Lion, Front Row is no longer part of OS X. With its enormous, deeply integrated feature set, Remote Buddy can easily be used as a replacement, though: browsing local and remote iTunes® music libraries, controlling DVD Player (including launching VIDEO_TS folders) and QuickTime® Player X (incl. filesystem navigation), browsing albums or starting slideshows in iPhoto™, switching between all these apps - Remote Buddy already does it all for years.

Lion has replaced Spaces and Exposé with Mission Control. So these Behaviours are no longer available under Lion. If you want to switch to the existing fullscreen space of a particular application, all you need to do is to activate the respective Behaviour.

The Accessibility Behaviour is no longer available under Lion.

iTunes® 10.4 was released the same day as Lion - and Remote Buddy 1.18 already supports its major new feature: the fullscreen mode. As it turns out, however, Apple® at the same time removed the previously available keyboard shortcut for switching to a dedicated fullscreen CoverFlow mode, so that it can no longer be made available through Remote Buddy when using iTunes® 10.4.

Lion brings a lot of nice detail improvements to its bundled applications. iCal features a new year view. And like Safari and Preview, it now also supports a fullscreen mode. With this update, Remote Buddy gives you access to these.

Safari and the Virtual Mouse

Lion's 64-Bit kernel and an update to Candelair

When transitioning OS X® to a 64 Bit kernel, Apple® also removed functionality from its IOKit driver stack. In consequence, Candelair can no longer implement a compatibility hook needed by some software. Such software uses outdated, error-prone code to implement support for the Apple® Remote on its own. Software using said code will not be able to access the Apple® Remote when Candelair is installed - and in turn can also not be controlled with Remote Buddy's Virtual Remote any more. Since almost all popular and actively developed software - including EyeTV, Plex, XBMC, Boxee, iAlertU and of course Remote Buddy - is now using our modern, user-friendly HIDRemote class, this hardly presents a problem in real world, everyday use, though. If you, however, depend on software with a 64 bit incompatibility, you can boot your Mac® with a 32 bit kernel by pressing and holding the keys 3 and 2 during boot.